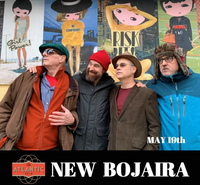 The fusion between Jazz and Flamenco is undoubtedly one of the most exciting artistic expressions currently emerging from Europe.

The result, in the case of New Bojaira [Bo-hi-ra], is an original and engaging fusion, blending jazz improvisation with the excitement of flamenco rhythms and singing to create a powerful combination of energy and subtlety on stage, taking audiences on a fascinating multi-cultural excursion.

New Bojaira released a new album, Zorongo Blu on 2018. Featuring jazz legend Randy Brecker on the track titled "El Diablo Llama a Mi Puerta". New Bojaira’s debut release is a collection of original compositions and jazz standards with the addition of the traditional Spanish folk song Zorongo which, when given a bluesy jazz/flamenco treatment, becomes the vehicle for the band's unique virtuosity and is transformed into the album's title track. Each composition on the album has a distinct and original feel, from a flamenco framing of Thelonious Monk’s “Round Midnight” to Hernandez’s setting of two poems by Miguel de Cervantes “Jaleo del Celoso Extremeño” and “Farruca de Argel”. Jazz soloing is juxtaposed against the time-tested backdrop of flamenco rhythm.

“A great combination of Flamenco, Jazz and some interesting hard bop styles that I like quite a bit.” Darek Mazzone-KEXP (Seattle)

“New Bojaira’s album is a classic celebration of the collision of all that is Moorish and Arabic in Spanish music with all that is African and American in Blues and Jazz.” Raul da Gama-Latin Jazz Network

“… [Zororongo Blu] displays how adept and versatile the group is, how they can fit at home in multiple worlds without sounding like a parody of a distant genre.” Andy Jurik-PopMatters